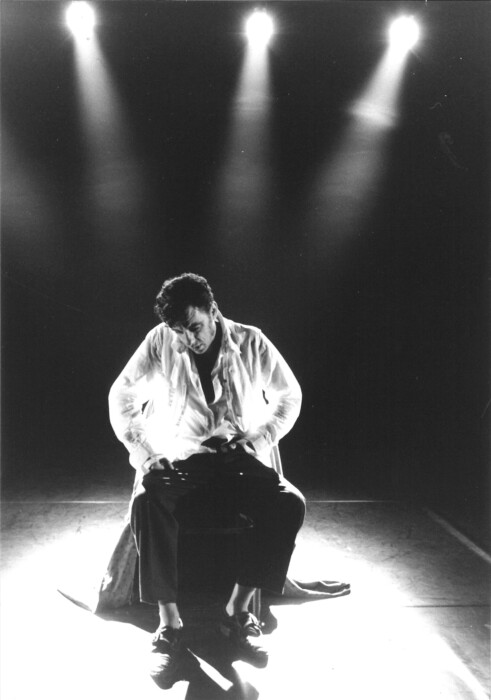 “Peter De Graef is a theatre maker pur sang. An artist with a vision and a commitment. An artist who has something to tell and who also miraculously succeeds in getting a wide audience, young and old, to think and at the same time relax.”

“The monologue is a stepchild of the theatre. But anyone who sees Peter de Graef at work immediately loses that prejudice. De Graef is a phenomenon.”

“Peter De Graef mercilessly drags the audience along in a fantastic story, grand, hallucinatory and often crushing. The climax hits you like a slap in the face.”

“My heart has filled with joy, my joy is reflected everywhere, I thought for a long time that I was no good, but it came right in the end.” from Henry of Peter De Graef
Het TheaterFestival not only shows today’s most important stage work; she also dives into her archive in search of a Golden Oldie. A performance that once shook the foundations of theatre. A gem from stage history that the TheaterFestival wants you to (re)discover!

Golden Oldie 2020 is the monologue Henry by Peter De Graef: a performance that exactly 23 years ago won the Thersites Prize, or the prize for theatre criticism, of the Dutch-Flemish Theatre Festival 1997 and time and again won standing ovations.
It is difficult to write about this text, because Peter De Graef intertwines a series of narratives that he takes to a point where the spectator tumbles from one surprise to the next.

In a dull village a frustrated man sighs against life. He loves his wife heartlessly; his assistant understands nothing of her boss. Wavering between ambition and despair, the man gives in to his oppressed misery. The outcome is catastrophic. The villagers also play a role in this bizarre adventure in which an angel comments and a large rabbit plays the key role.

In an inimitable way De Graef interweaves improbable coincidences with everyday actions. One wonders where this all goes, but at unexpected moments everything shifts ingeniously and perfectly together.

Henry encompasses the excitement of the detective story, the amusement of the stand up, the emotion of a sincere confession and the intellectual pleasure of the playful spirit. How beautiful theatre can be.

You can also follow the performance Henry (on 11/9) LIVE from your living room with a livestream ticket of € 5.

Peter De Graef is a master storyteller and winner of the Louis d’Or (Dutch award for best theatre actor). Besides acting and directing, he wrote prize-winning texts such as Ombat, Henry, N! ks and Zoals de dingen gaan. He has a fondness for centuries-old writings full of wisdom that no one seems to know anymore. In the theatre he searches for a form to convey that knowledge in a direct way to the audience, without the detour of the story. He has worked with various theatre groups such as Theater Malpertuis, De Werf, Paardenkathedraal and De Kolonie MT. On television he played in Den elfde van den elfde, and Zie mij graag, amongst other things.