A foundling is a child without a past. But how can you live without a past? Visual Artist and theatre maker Stefanie Claes addresses this question in her play Mia Kermis. She tells a life story without words, but only with puppets and paintings. 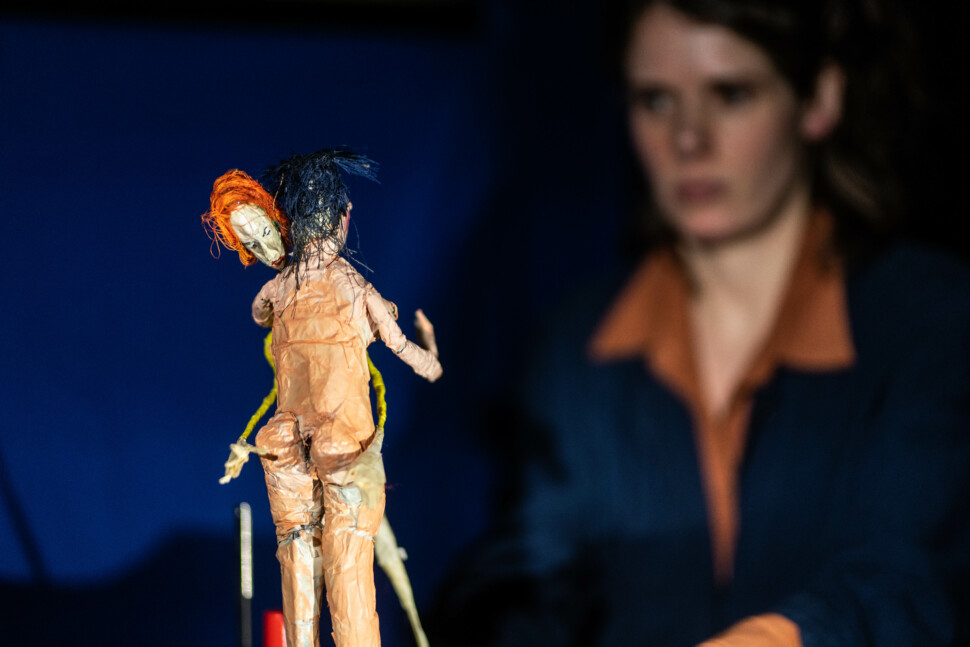 How did you first come into contact with the topic of foundling children?

Stefanie Claes: ‘I lived in Antwerp and a few streets from my house there was a baby hatch, the only one in Belgium. I was walking past it and saw the word “Vondelingenlade” on the house. I thought “Wow, it’s here?” and wanted to visit it. I contacted the owners and they were really friendly. They showed me the whole organisation for families and mothers in poverty. They said “Here you open the door and you put the baby here. Then you close the box and the alarm goes off.” She also activated the alarm. It was strange because it was such a practical thing. It stayed in my head to work with this.’

Why did you decide to make a play about them?

‘In the beginning, I just wanted to think about it and work with it somehow. I was also busy making puppets, just experimenting with them in my atelier. At one point this idea of the foundling child connected to the puppets. Because I thought it was good to tell the story with images. I had an image stuck in my head. It was the image of a baby lying somewhere, and everybody, including the parents, is gone. That was the start and that is why I stuck with the theme of a foundling. For me, the foundling is a metaphor for everyone. Everybody has to deal with their history.’

During your research, did you get to talk to someone who grew up as a foundling?

‘I have a very good friend who is a foundling, so I talked to him. Other people said “I can give you names.” At a certain moment, I didn’t want it anymore. I wanted to tell something else. So I mostly talked to people who are working with children with no parents, for example at an adoption house. I think it’s important to hear the opinions of experts. For me that was enough information. In the beginning I was also thinking about talking to a child. But they are very vulnerable at a young age so I didn’t want to do it. But maybe I want to show my performance to them.’

Can you walk us through the process of developing the play?

‘I worked on it for a few years. I told myself in the beginning that I wanted to work very intuitively. I also decided to work alone. Sometimes I made a puppet and from that, I got ideas for the play. It was as if my puppets and drawings told me how to build up my story. I didn’t imagine a story from the beginning. I made puppets without knowing whether they have a role in the play. For example, I made an Indian and I really worked on it for a long time and thought “Oh yes, it’s really theatrical!” but at the end, I could not use it in my story. Because I was working alone, I also needed rehearsals from time to time. I started really early in the process to show it to the public. Then I had to explain really well that it was not finished yet.’ (laughs) 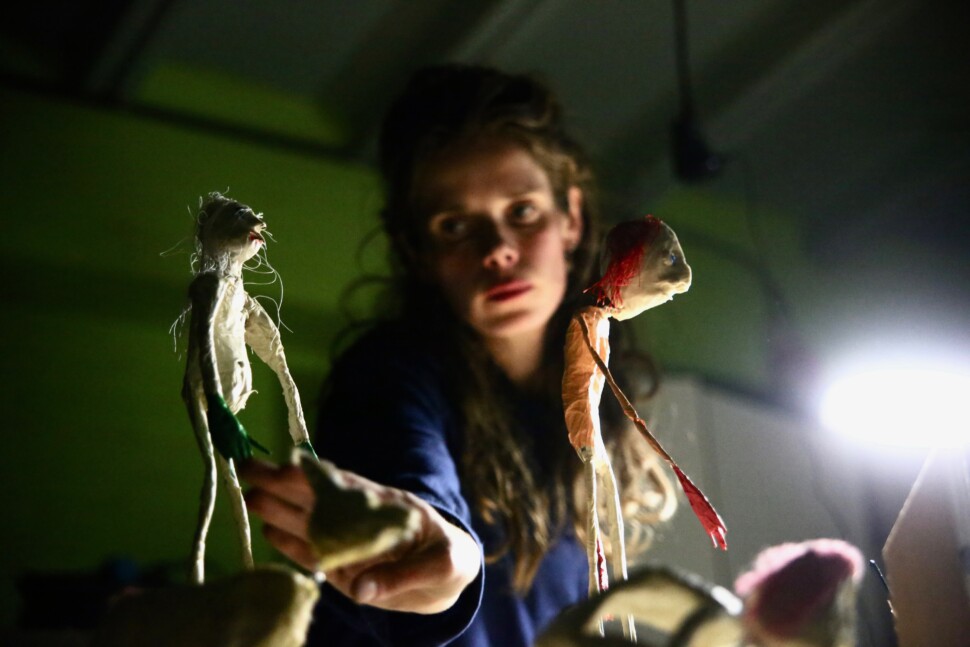 Your play tells the story of foundling child Mia Kermis. How did you approach the task of reconstructing the life story of a foundling?

‘When I imagine her life, it gives me the inspiration to make my scenes. I want to show that someone who doesn’t know his or her parents has a big blind spot, a dark place where other people know their roots. I wanted to bring across the feeling of a blind spot in the story of my character.  But it’s not the case that I literally make her life. I didn’t want to tell a story from A to Z. For me, it starts with the story of her life. But then I will open it. The piece starts with two people having sex. Because that’s the beginning of everyone. So it was important for me to start with that scene.’

Have you always been interested in how other people lead their lives?

‘Yes. Biographies of people who are not known is something that triggers me. It’s the first time I made something like this, a story of one person. But every time when I work, I need stories of people. For example, I made something about Chernobyl a few years ago and I also needed to read about the people who were there at the time. I need a human factor in my plays. Now I am working on the story of my grandmother who was in a concentration camp. The biography is something that always comes back.’

Why did you choose puppet theatre as a medium to tell your story?

‘In fact, I really don’t like the classical puppet theatre. But I had the feeling that it could be a form I can use to tell my story. And also with drawings, I have the feeling “Oh, it’s such a nice way to tell a story!” For me, it can open a world that I cannot always find in words. Before, I also wrote a bit. But sometimes, it feels a bit claustrophobic. And then I also had voice problems from another play and I thought “Pff, when I can show something without speaking, I’m relaxed.” They are big decisions for me. Do I use text? Shall I use film? Music? Who makes the music? How do I use light? For me it’s very, very important. But I want to use the forms that I already make. If I want to use puppets, I will not take lessons in making them. I don’t make puppets very professionally but I don’t want to learn it. I want to make them how I make them.’

How did you acquire the skills to make all these puppets?

‘In art school, I wanted to make puppets but I was scared to start. But then the professors said “You have to make now, what you really want to make” and I thought: okay, I will start to make puppets! And I made some very bad ones. When nobody was looking, I tried it. (laughs) Since then I never stopped. Maybe the first seed of Mia Kermis was planted many years ago.’ 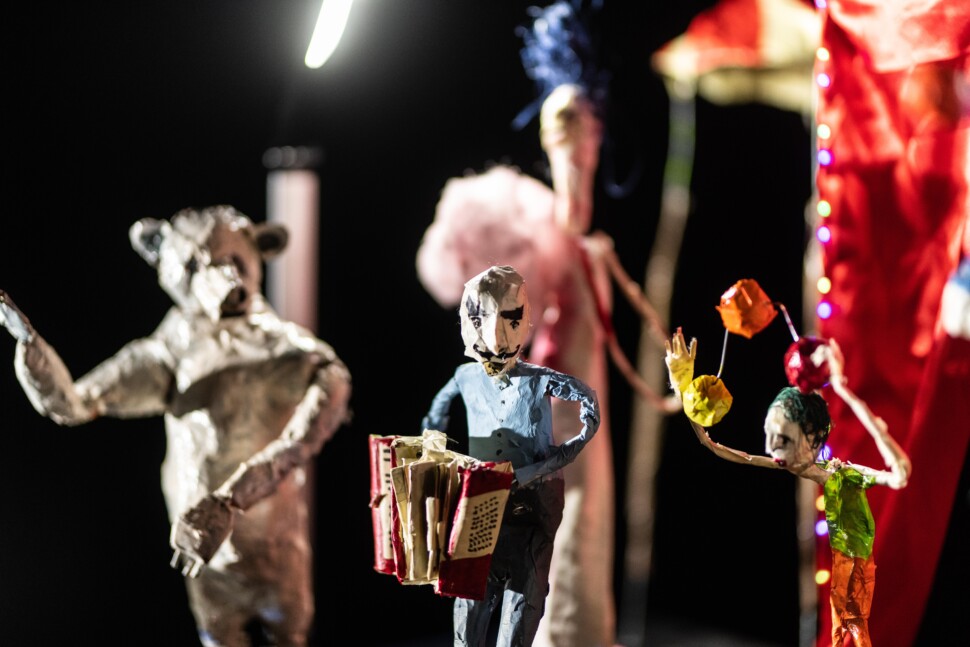 How important is the music in your play?

‘In the beginning I thought it would be a necessary factor. Because it’s really hard to show something without words and no music and no sounds. Then I wanted to work with Jeroen Van Herzeele, a jazz musician. He’s really good and we tried one rehearsal together. But I had the feeling I really had to do it alone. It was stronger than myself, that idea. So I tried out how to make music myself and bought a loop station. Now I also make music and I discovered that I really like to do it myself. I improvise with my voice and some children’s instruments, a little flute for example.’

Mia Kermis is a wordless play. How do you tell a story without words?

‘I realised that it’s possible to use something simple, like two puppets, to tell a big story. You have a man and a woman and you show them naked. It already tells a story. You can manipulate the story really easily. When you turn the woman a bit, you can tell that she doesn’t like the situation. And in the meanwhile, every day I thought: what do I have to tell? What is my story? I don’t immediately have the answer but I think asking the question while working is my method. I build it up from scene to scene, chronologically. And I didn’t write anything down. It was the first time I completely trusted the things I was making. I had the whole story in my head. Only when the premiere came in February, I wrote some of it down so that I don’t forget anything in the heat of the moment.’

Did your work on Mia Kermis change your attitude towards having kids?

‘Having a child of my own was also an important trigger to make this. The birth was such an incredible thing so I had the feeling that I have to do something about it. I hate it when people have ideas of what parents have to do or when a mother cannot take care of a baby. That they punish her. I don’t understand that. When I was giving birth, I thought everybody who gets a child loves the baby. But for some women, the circumstances are so hard that they can’t do anything but give the child away.’

Mia Kermis is a foundling who is named after the place where she was found. How does a last name influence a life?

Mia Kermis goes on a quest to find her past. Is knowing your past necessary for moving on?

‘It’s hard to say yes. Because it would mean that people who don’t know their roots cannot do it. And that’s not true. But sometimes it helps to understand yourself. It’s a part of who we are, our past. For me, it’s very important to know stories about my parents, my grandparents. Because I can relativise myself. I am a very small part of a very big story.  There’s a reason why Mia Kermis wants to know who her parents are. She’s a bit stuck with that. But my story is more about letting go of that idea. You have to make something of your life without your parents. You have to let it go.’

‘I think when people don’t understand you. When you feel that you cannot make connections with others. For example, a foundling wants to make a connection with the parents but cannot do it. Overcoming loneliness works differently for everybody. My solution is moving and walking. Sometimes it’s reading a book. Or just letting the time pass and trusting that it will go away.’

The baby hatch near your house was the starting point of your play. After doing all this research and thinking about the topic so intensely, what do you feel when you see a baby hatch now?

‘When I heard that there was going to be a new baby hatch in Brussels, I was happy. It still triggers me when I hear on the radio that there was a new foundling in the hatch. It’s the same feeling as when I started. I was also touched by the news that a woman in Antwerp put a baby in an apartment and walked away. She couldn’t take care of the baby. The police found her and then it was in the newspaper that she may have to go to jail. They immediately punished her. It’s hard to read because I think there’s nobody who has questions about why she couldn’t care for her baby. In the beginning I wanted to put it in the piece, my idea that you have to understand the women instead of punishing them. But then I wanted to challenge the audience to think about it themselves. The mother is still in the play though. In a dream, you feel her presence a bit. At least I hope so.’ 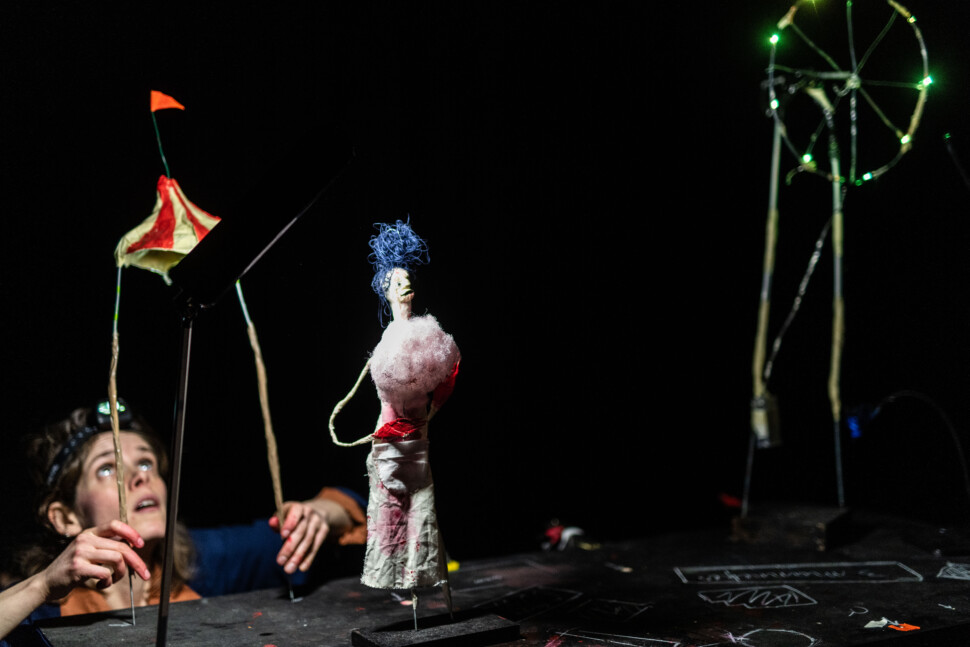 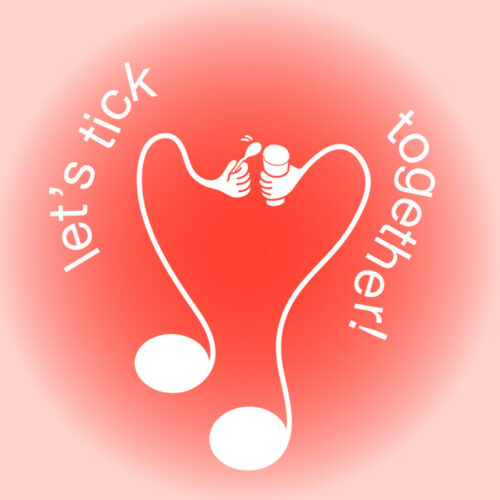 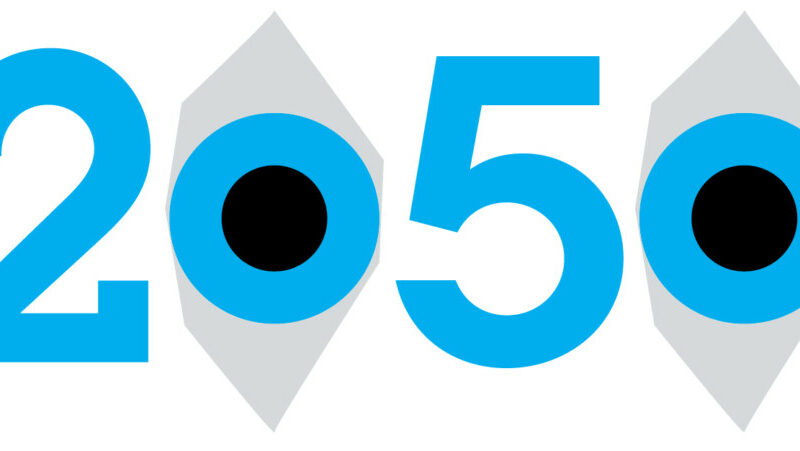 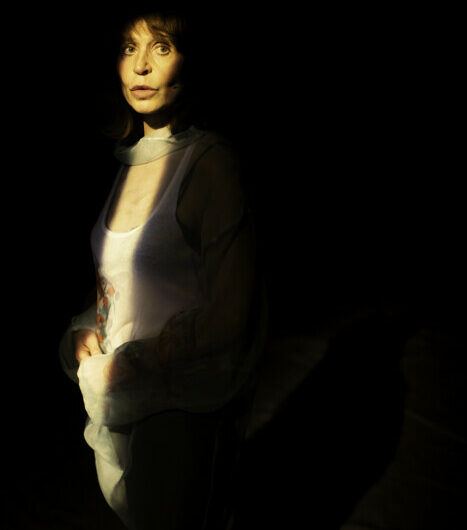 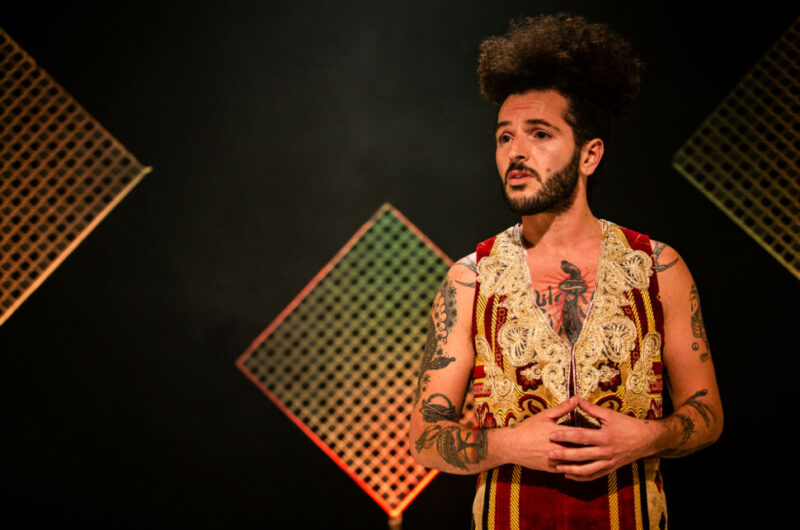 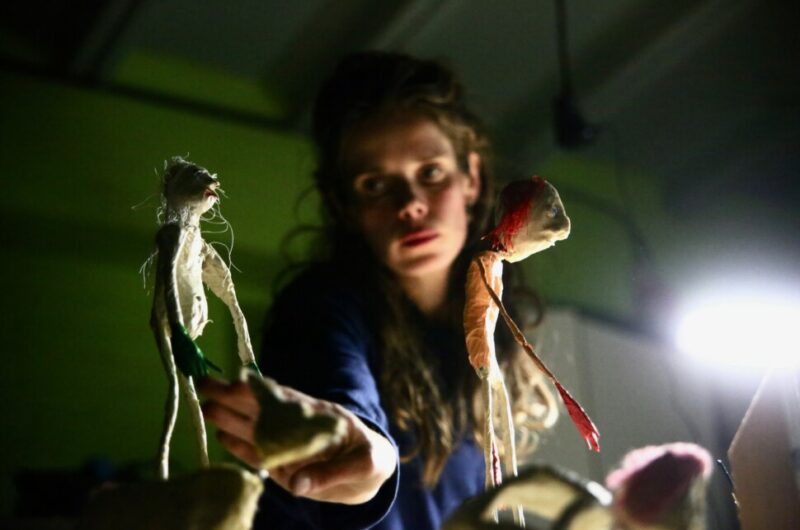 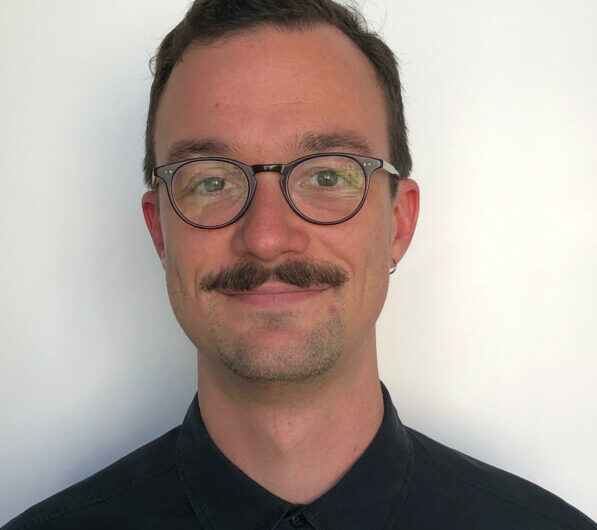