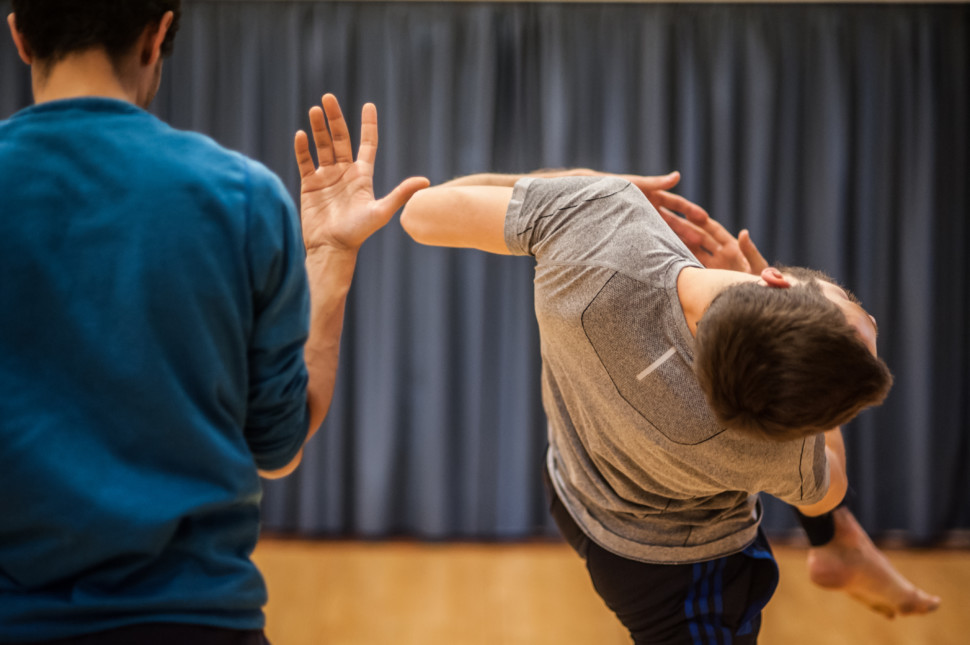 Salva Sanchis: ‘Discodesafinado was a duo by Joris Vermeiren & Senjan Jansen. Through the 1990s and the early 2000s the two friends had several collaborations. We collaborate with each other since 1998, they made the music for my very first choreography. We meet again twenty years later for Radical Light.

Joris & Senjan were important for the Flemish minimalist techno scene. It doesn’t have much to do with the commercial techno. When you listen to their music you hear techno beat music but you will also find delicacy and carefulness. That is why we label it as minimal and experimental. It is really in between two worlds. It is part of the club scene but also of the contemporary dance music scene. This was perfect for Radical Light because I wanted to work with movements that are clearly influenced by the way we dance intuitively in a club. And at the same, I wanted those movements to be choreographed and designed in a way that they belong more to the contemporary dance world.

The specific piece of Discodesafinado is a concert that was recorded in 2003 in Charlatan in Ghent. A recording I always kept on listening to, sometimes during rehearsals, during classes. I always had in my mind to make a choreography out of it. It is a 45 min track and it was put together for the audience that was present. There is something about that, you can still feel it in the result. They prepared music material and they mixed it live. Techno music fits my approach to dance. First of all: it doesn’t have lyrics, in that sense, it is not theatrical or has a narrative. Secondly, to have regular beat is really interesting for a dancer or a choreographer. There is a mechanical aspect to it but next to that, it is possible to bring out an organic aspect which the dance provides. This combination is really interesting for me. Techno music is strong. It is really present, but at the same time, it is neutral enough to let the dance exist.