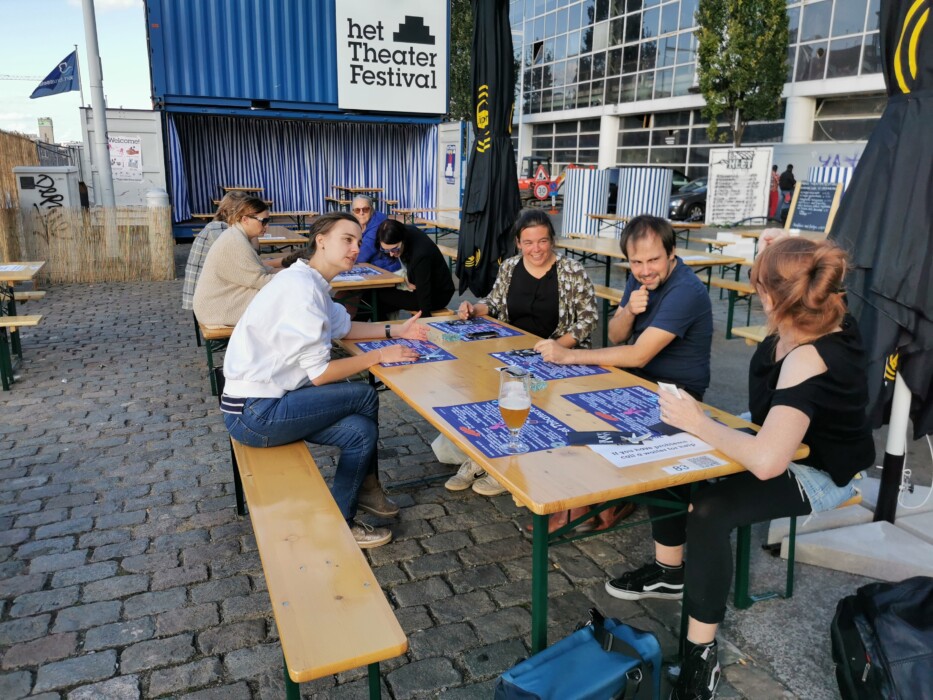 …is what actors could experience for the last three days at the WISPER workshop. Its participants watched three festival performances. Afterwards they talked to the creators to get deeper insights into the plays. Then they analysed them and finally acted themselves, with methods from the performances.

Participant Nora Laermans (36) was happy to finally watch theatre again after the long lockdown. The discussions with the creators greatly improved her experience. ‘It adds more layers’, she says. ‘Normally when you go to the theatre with friends, you talk about whether you liked it or not. But the discussions here gave me a deeper understanding of the plays’, says Nora. She acts at Salamie Improv, an improvisation comedy group in Ghent. Acting is her hobby and balances out her rather serious job as an auditor at the High Counsel of Justice. She has already followed numerous WISPER workshops. About this workshop she says: ‘Everyone in the group is very passionate about theatre so it is a really nice bunch of people who talk about something they love’.

One of the plays she watched during the workshop was Realtime by Dries Gijsels which follows the story of a theatre director trying to create a show about time. The goal was not to remake the play but to apply its techniques in playful assignments. After watching the play, they explored the theme of being yourself on stage as opposed to performing a character. ‘Because if you want to evolve a character, you can start with yourself, or you can do something completely different’, Nora explains. As a first step, workshop teacher Eva De Mulder told the participants to put a chair on the stage as themselves in front of the rest of the class. The second step was to realise the audience while they do it. And finally, Eva said ‘Do the same thing but be someone completely different’.

‘Like a witch or a grumpy old man’, Nora recalls. This made her wonder: ‘Can you even be yourself when people are watching you?’ She came to the realisation that you’re always performing when you’re around other people. ‘As soon as you’re on stage, it’s impossible to just be yourself because you know that people are watching you’, she explains. ‘Even now us two are performing’, she notes.

Through the methods of the workshop, not only her understanding of the plays but also her admiration for theatre as an artform grew immensely, she summarises. ‘When the creators talk about how they conceived their idea and how it grew and how all the different elements come together in this one play, you realise it’s such an art to make a good play!’, she explains enthusiastically. ‘You realise how much passion and effort they put into making it.’