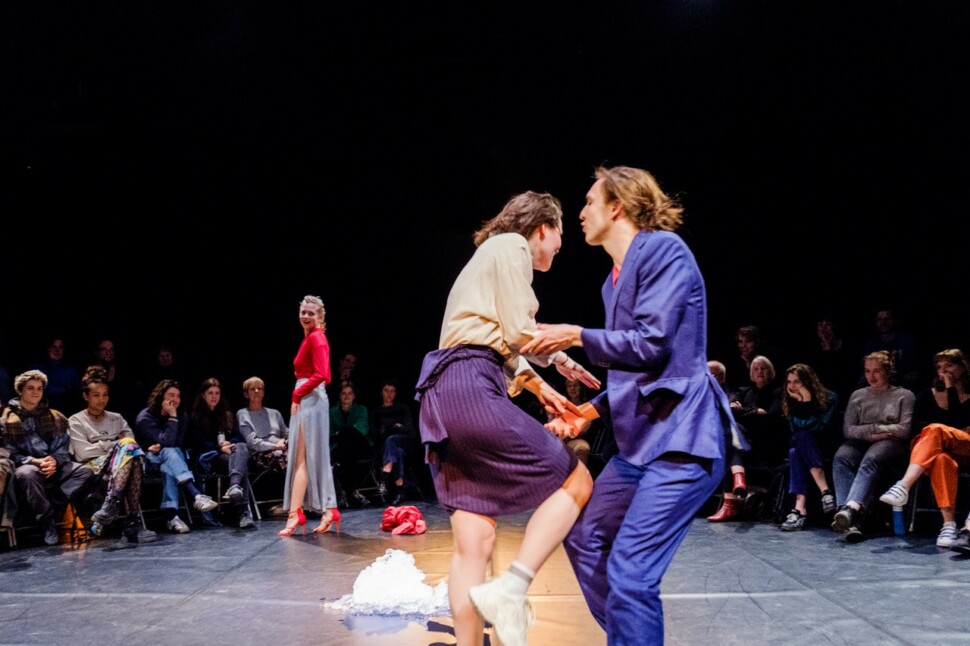 “Not the big shots, but a group of drama students seduced the jury this year. Their version of Who's Afraid of Virginia Woolf brings together the best of theatre: contemporary writing, intelligent set design, existential drama and four greedy actors who want to conquer the world.”

“When four young actors play Edward Albee's 'Who's afraid of Virginia Woolf?' at the end of their training, you don't immediately expect a small masterpiece. Yet this interpretation comes pretty close. They play the stage masterfully.”

“This is genuinely intelligent theatre. Subtle and strong performer theatre.”

Meanwhile, many know the story of Who’s afraid of Virginia Woolf? : George and Martha vent their deepest frustrations by blaming each other and drag their nightly guests, Nick and Honey, into a destructive psychological game. Flor Van Severen, Imke Mol, Mitch Van Landeghem and Naomi van der Horst have ventured into this ‘play of plays’ with which they completed their training together at the theatre school in Ghent.

How does one, as a young actor, slip into the shoes of a character with such a rich history? How do you interpret a modern classic, so many versions of which have already been brought to the stage and screen, both by amateurs and Hollywood stars? Through their characters, the actors engage in a battle with truth and appearance. Gradually, everyone is absorbed into the fiction. In this interpretation too, there is a certainty: it promises a long after-party until dawn. And no one will be spared.

Flor Van Severen, Imke Mol, Mitch Van Landeghem and Naomi van der Horst have played at FC Bergman, Studio Orka, Hof van Eede, Malpertuis and the KIP, among others. Together they form the new collective WOLF WOLF. In their joint work they try to deepen the stage repertoire out of a love for playing and at the same time make it accessible to a wide audience.