A shapeshifting company of tricksters…

Ontroerend Goed is one of the best-known Belgian theatre companies in my country, Scotland, where they’ve received critical acclaim (despite no-one knowing how to pronounce their name) and recently launched their new book, Pieces of Work, which also appears as part of het TheaterFestival. Most plays can simply transcribe the dialogue and stage directions onto the page but Ontroerend Goed doesn’t make plays so much as theatrical experiences. As a shapeshifting company of tricksters, they borrow from each and every theatrical style and tradition; bending, breaking and rewriting the rules to find the perfect form for the content. Their first book was called All Work and No Plays for a reason!

Like that first book, the new book Pieces of Work is no simple play-text but rather it translates the theatrical experience onto the page in such a way that the reader understands the dramaturgical mechanics at play and also feels what it’s like to be inside the show. Whether or not you’ve seen their work, it’s an enlightening read: bringing new depths to any shows you may have seen and piquing your interest in the ones you haven’t. It’s no exaggeration to say that Pieces of Work is a work of art in and of itself.

There’s a notable shift from Ontroerend Goed’s earlier work, moving from provocative and confrontational interactive performances to more apparently conventional theatre that dissects the social structures that dominate our lives. But how do you show the patriarchy or capitalism or an ecological crisis onstage? They’re too big, too all-encompassing. An actor can’t portray them. But the dramaturgical structure can… 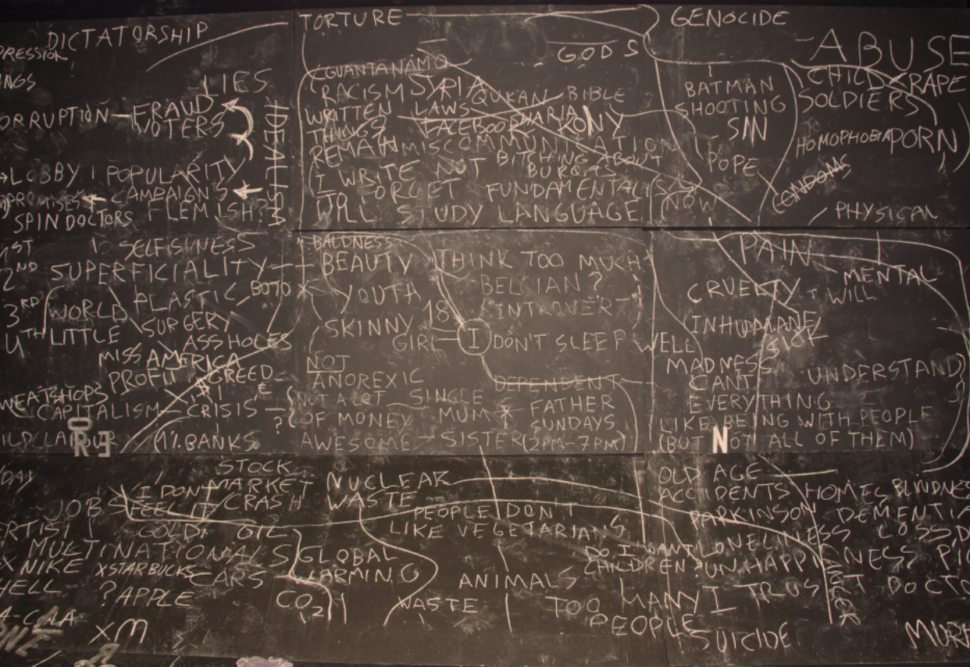 …so they need a new approach.

Sirens is a symphony of screams against the patriarchy and everyday sexism, placing righteous rage into rigid musical notation. Listing beauty products, examples of catcalls and sexist jokes; there’s a musical quality and rhythm underneath the wrath. Even when trying to challenge the system they’re still beholden to it. £¥€$ (LIES) also follows a tight structure, reminiscent of Greek tragedy but the audience play as bankers in the casino of global finance. Here it’s not Fate that damns us but neoliberal ideology and a set of rules that ensures there is no alternative to the inevitable crash.

Loopstation evokes the atomised lives we lead, each archetypal character adrift on the page at the whims of the revolving stage. The palindrome-performance Are we not drawn onward to new erA can be read forwards, flipped over and then read backwards with each interaction acquiring new profundity. It’s telling that the humans have no real ability to impact the wider world they inhabit either onstage or on the page. Even the most apparently conventional piece, World Without Us, refutes its form. A monologue that requires its speaker to cease to exist. By the end, in the darkness, we’re left to wonder what will truly remain; not us but maybe the monuments we built.

Let’s just hope that anything we leave behind will give such a holistic and protean impression of humanity as Pieces of Work does for Ontroerend Goed.