Escaping the Echo Chamber? – Different responses to race on stage

There’s no shortage of work tackling racial issues at Het TheaterFestival and it’s encouraging to see so many artists of colour being given a high-profile platform. But are we simply preaching to the choir?

If There Weren’t Any Blacks You’d Have To Invent Them is a razor-sharp adaptation of the 1968 film of the same name in which the diverse ensemble expose the absurdity of racism, the apparent need for an ‘other’ and the arbitrary nature of who is deemed ‘other’. It’s a smart, slick and stylish satire whose staging expands upon the already absurd script. However, I agreed with everything it had to say – not surprising given the source material is from the 60s and we’ve made progress since (even if it doesn’t feel like it!). Which means it makes for a disappointingly easy target and pats the audience on the back for the simple task of not being an overt racist. So just how effective is satire as a tool in the liberal social justice movement? If you already agree with the show then it will simply confirm your beliefs and if you disagree with it then why would you buy a ticket in the first place?

Thinking back of Sarah Moeremans State of the Union, maybe we should make and see more theatre that we disagree with. Theatre that tests our convictions and preconceptions so that we can better argue what we genuinely believe in and agree on. That way we’ll also know what  alternatives we’ve rejected and be broader, more fully-rounded people. We can’t have a dialogue if we don’t understand each other’s position and that means we’ve got to be open to what they have to say and invite them in to listen to us. 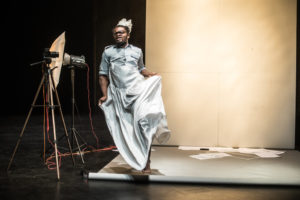 Studio Shehrazade was a striking example of this as it’s quite resolutely not made to please either the white gaze or the white gays. Tackling something altogether more complicated: the intersection of racism, colonialism, and homophobia, Haider Al Timimi and Gorges Ocloo have made a piece of rough, popular theatre that speaks to young people of colour. Though whether they’re open to the show’s message is another matter – the audience of teenage boys largely from ethnic minority communities heckled and booed in response to seeing two gay characters of colour. It’s confronting but such a visceral response proves the need for theatre like this to exist and engage with a wider audience who may not automatically agree with us.

Al Timimi and Ocloo took the jeers in their stride, explaining after the show that they themselves had gone through the same limiting school system (like ‘a concentration camp’ in Al Timimi’s words) as the boys in the audience. The system is inherently exclusive, discouraging curiosity and creativity amongst minority groups and simply pigeonholing them into technical roles. Al Timimi and Ocloo’s priority isn’t the well-to-do white audience who politely nod along with them (and I include myself in that category) but the people who ordinarily wouldn’t come to the theatre in the first place. That’s how you escape the echo chamber of cerebral, apolitical, pseudo-Zen theatre that seems so prevalent in Flanders.

Back in my home country, Scotland, we often look enviously at the generous arts funding Flanders receives. But while the lack of public funding may have resulted in less experimental theatre, it means that anyone who does receive it understands just how privileged they are and their huge responsibility to make sure that the art they make is relevant. The world is on fire. Literal fascists are taking over. Now is not the time for cool, cleverly constructed comments on the state of the world.

It’s not enough for theatre to represent society anymore, it needs to be a space where we shape society and that starts by making it accessible to everyone. Can’t afford a ticket? Let them in for free. Engage with every local school. Invite the kids into rehearsals and ask them what they’re interested in. Let them shape your program and art. Give them some ownership over the theatre. Diversify your staff (that applies to class as well as race and gender). Don’t just view them as potential audiences but as active participants in the work.

When Mathieu Charles was asked what a decolonized theatre would look like, he said that he had no idea because he’d been indoctrinated into the dominant, Western-capitalist system of thinking. We’ve all been indoctrinated, so let’s use the arts to challenge our preconceptions, experiment and come up with ideas and propositions we may think are crazy or impossible. After all it’s the arts’ job to play with the impossible! We can believe an actor is someone else onstage, so why can’t we imagine an alternative? Flemish theatre is used to experimentation. Let’s take it to another level.

Tags: Liam Rees, Studio Shehrazade, If There Weren’t Any Blacks You’d Have To Invent Them