Images from The Sheep Song still haunt me days after having watched the performance. The show opened with the impressive feat of herding a flock of real sheep on stage without a visible shepherd. While I was busy asking myself how they managed this production nightmare, I was fully taken away by the sounds of their hooves on the parquet stage floor mingled with the occasional ‘baaa’, their fluffy white mass and their domesticated existence being made into a spectacle to generate sensations for the enjoyment of humanity. What the show has successfully achieved is not only in producing highly evocative tableaux vivants, but also through these dialogueless depictions, the audience was given space to freely interpret and dream up their own meanings. What it has highlighted for me is our individualistic desire to be different, to spring out from the crowd, to believe that our existence is not just one of the many and that our actions are not a repetition of history. At first glance, it seems almost like a curse to live a mediocre life, but the remote desire to join the elite unique has created more pain when one finds out that other existences might not necessarily be a superior choice to the one that you are thrown into. Through the eyes of the human-sheep, being human mostly looks and feels traumatic.

There have been many suggestions that animals, especially mammals, have emotional capacities similar to humans and the fight for their respectful treatment is grounded on the equivocity of suffering between species. Then what about cognitive abilities such as imagination? If imagination is assumed to be a distinctive ability that is bestowed on human beings, then the gift of empathy through imagining being in others’ positions is truly a human endeavour that blurs our individualistic tendencies. We can then say that only humans would imagine the possibility of being another species. Furthermore, only humans would imagine other species’ potentiality in being humans. The human-sheep’s view of human society in The Sheep Song is a melancholic one: seeing the span of human life that comes with all the trials and tribulations culminates in the understanding of the fragility of human existence. While this lamentation can be seen as a kind of self-commiseration, the novelty of it is the imaginary stepping out of the shell of a human body to look at ourselves from an animal’s point of view. The human beings’ view of a sheep’s view of humankind. 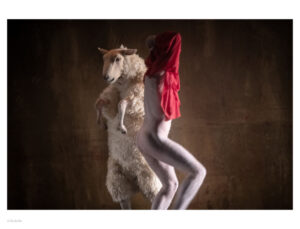