Art: A radical act in itself

In Radical hope – eye to eye, grief, anger, desire, happiness, resentment, and horror all come together on stage with Stef Van Looveren’s artistic vision. Although the performance was selected by the jury, it will not be performed during Het TheaterFestival. So, for our readers, I traced Stef Van Looveren’s works to have insight into this radical-utopian performance. 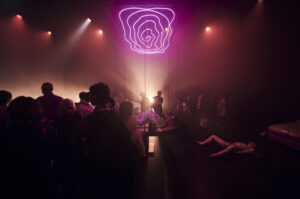 ‘I don’t think art should have a purpose at all. The freedom to exist and just be, whatever that being might look like or evoke, is a valuable and radical act in itself’, says Antwerp-based multidisciplinary nonbinary artist Stef van Looveren in their interview with Metal Magazine. Stef’s performance Radical hope – eye to eye, which is highly recommended by the festival jury, reflects their perspective. As announced on the festival’s website, it is a heavy production both financially and in production. As a result, the audiences were unfortunately informed online that Radical hope, praised by the jury as ‘an intensive explosion of energy,’ could not be seen at the festival.

One can imagine that this news disappointed many audience members who were eagerly awaiting this performance. I too would have liked to see this apparently breathtaking performance as part of the editorial team. That is why I read the jury report, as many festival followers probably do. The jury’s opening question on the report ‘can love be political?’ made me curious. ‘This question haunts the audience after seeing the performance’, according to the jury. This statement led me to think more about it. I tried then to visualize what kind of performance it was by reading the jury report and interviews with Stef. For this, I watched the video on the festival page and looked at Stef’s works mentioned in the jury report.

One of their works, RADICAL HOPE (2018) is the title of a video piece in which each performer embodies a different gender. Also, the film portrays stages of life, stages in society, and stages of emotion and feelings. Stef explains their video piece in the same interview with Metal Magazine: ‘It is about mimicking our social conduct along with visual culture, reliving and recreating aspects of life in a surreal gesture. A radical hope for the future.’ 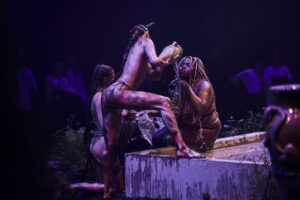 After all this, one can ask how all this takes place on stage. The jury explains: ‘There are the scenes in which the artist couple Van Looveren and Mustaf Ahmeti make love, masturbate and embrace each other sometimes violently, sometimes tenderly but in any case, break all taboos.’ Mustaf Ahmeti states that ‘Radical hope – eye to eye shows a landscape of opportunities in a very intimate way’ in an interview with Subbacultcha. Although it is not possible to see this intimate performance live, festival-goers can find Stef Van Looveren’s sculptural work EAT ME OUT (2020) in the entrance hall of Kunstcentrum VIERNULVIER.